“You are Riley, a new student at TW High School. You have to get used to being a student for just a fraction of a semester. Simple, right? However, five girls catch your eye and you manage to find an opportunity to work with one of them before graduation! … But is that all there is?”

All For You is a visual novel created by Michaela Laws, who’s popularly known for her role of Ayano Aishi in the game Yandere Simulator. Mind you this is not her first foray into creating visual novels as she has previously made other games such as Seduce Me, Remember Remember, and many other games, so we can expect this game to be much more fleshed out compared to her other games.

The game starts off, in a rather meta way, with Riley (you) playing a visual novel titled Cherry Blossom before you are abruptly interfered by your parents calling you asking how you’ve been doing.

The next day, you are greeted—albeit in just a split second—with the first two romance interests, Latifah, and Sidney, then, you meet the rest of the romance interests as the game progresses.

Now, immediately after you start up the game, you are treated with a rather soothing soundtrack, which is one of the positive points of the game as there are many beautiful soundtracks that can be heard all throughout the game. The art style is smooth and fantastic, each character is given a distinct feature that makes them unique, and the GUI is clean and great to look at as well. The game boasts fully voiced characters with amazing work done from the VA’s that will keep the players from getting bored quickly. The game will add features such as stat-building minigames, character customization, and even the option to play Cherry Blossom once the game is fully released. And with all that said, there’s not really a negative side to the game as of yet since this is only a demo.

From this point on, I will be spoiling the story that is available in the demo, so if you wish to play the game yourself, you can click here to go to the download page, and you can skip down to the bottom for the final review, you can, however, read some parts of this section without being majorly spoiled, there will be another warning down below.

After a while, you are given the choice to do a few activities, which will increase your stats, but it’ll only be of importance after the game releases. 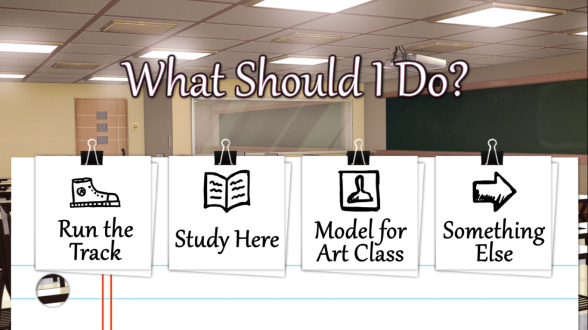 As the game progresses, you are soon given a choice on where to spend your time in, which in turn will decide who you’re going after, at least in the demo version.

I decided to go to the Courtyard to pursue after Jessika’s route, because i just love her overall design. Afterwards, the game is pretty much linear to the very end, there were some explanations about some final project that everyone’s working on to get a scholarship for a school, or a $10,000 check. After that, the game cuts to the OP, sung beautifully by Momoki, who happened to be the VA for Midori Gurin from Yandere Sim (Yes, quite a few VA’s here have voiced a character in Yandere Simulator), whose song had been teased around three times by Riley’s phone ringtone.

What was intriguing was what happened after the OP, this is your final chance to download the game from this page or skip to the very bottom of this page as this will spoil a huge premise/feature of the game, you have been warned. 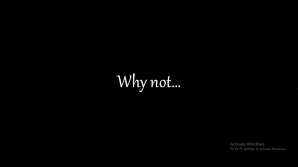 The first time i saw this, i brushed it off as some elaborate thing to get us to try everyone’s route and see all the dialogues, and so i did exactly just that, i pressed new game and i was treated to something different;

Notice that the character here was different from the first character that Riley chose to pursue after, i brushed this off as something trivial at first, but this line of dialogue piqued my interest.

The moment i saw this dialogue, my whole body shivered as this was an aspect i truly didn’t expect the game to have. After being creeped out by that, i proceeded the game as normal, until i got back to where Jessika and Benni were blocking the school entrance. Jessika had noticed us and talked to us, claiming that she’s seen her before somewhere. At this point, my love for this game increased by a lot, as this aspect may or may not have been taken from the hit game Undertale, by Toby Fox, where it included characters who are sentient to whenever you reset/replay the game again. I skipped through most of the dialogue as some remained the same, then i was treated to something different as well, further confirming about the self-sentient characters. The teacher quizzes us about his lecture about the Multiverse Theory, where you’re in the same set of circumstances but take different choices. You then receive a note from Jessika, asking us to meet in the courtyard. A lot of the dialogue after here refers to the feeling that Jessika has seen Riley before, then the OP plays, and we’re treated to this screen this time: 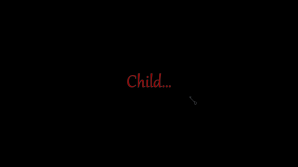 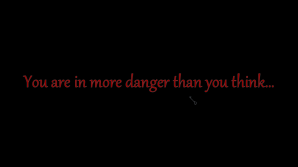 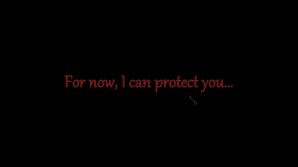 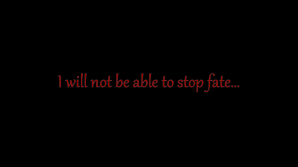 And now at this point, i had been fully freaked out, but gushing in excitement as i’ve never seen such feature in other visual novels. This gave me a huge appreciation towards Michaela Laws, who expertly crafted this game and its features. Afterwards i tried this with everyone’s route, feeling fully satisfied that the game is remarkably good. I had not expected this feature at all, but the game feature clearly stated about its “Ultimate Replay-ability”, to which it delivered its promise.

In the end, All For You is an amazing game, and although this is only the demo version of it, I strongly urge you to play this game. Not only does it have a great soundtrack, it also boasts an outstanding artstyle, and a very innovative feature—which i’ve yet to see in other visual novels—that will surely keep the readers on the edge of their seats. The game will come out sometime from late 2017 to early 2018, and if you can, i urge you to pre-order the game to support the creators so they can pump out more features to the game, and you can pre-order the game which costs $10.00 USD by going to All For You’s Itch.io page so you can support Michaela Laws in her endeavor to make more beautifully crafted visual novels.

Spread the word, broaden the timeline.